United Through Tragedy of Boston Marathon

Through social media and the news, word was spread about the incident quickly and everyone was informed of the tragic event. With something as tragic as the Boston Marathon bombings, came the unity of a nation. We were able to come together even through things that place us against each other such as sports. Much is known about the rivalry between teams such as the New York Yankees and the Boston Red Sox. However, due to the recent tragedy, pride and rivalries were pushed aside as prayers and love were expressed between the teams. The image below signifies the union of the two teams. 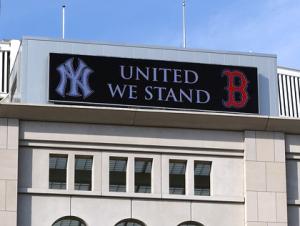 Along with the “United We Stand” banner, the New York Yankees honored Boston by playing Fenway Park’s traditional eighth-inning anthem “Sweet Caroline” after the third inning of Tuesday night’s game at Yankee Stadium. It’s a blessing to see rivalries pushed aside to recognize the importance of honoring those affected by the tragic event.

“I think it’s important that we recognize that we’re all behind the people in Boston,” Yankees manager Joe Girardi said. “You think about that being a song that’s a tradition there, that’s special to Fenway Park and the people of Boston, and you put the baseball teams aside. We want to be there for them.”

It is incredible to see the hearts of other cities reach out to support Boston through this tragic event. The bond created across the nation through events as tragic as the Boston Marathon remind us what a great country we live in as we open our hearts out and pray for those affected. Open your hearts and show your support for Boston!