St. Patrick’s Day and the Birth of Infographics

St. Patrick’s day is near, and it’s the time of the year when folks at Van West Media all sing this song:

We’re little leprechauns,
Dressed in green,
The smartest lads and lasses
That you have seen.
If you hire us, so it’s told,
We’ll bring you a big pot of gold.

Now where was I? Ah yes. The life of St. Patrick, the Apostle of Ireland, the inventor of infographics. Pass me another whiske’ Shaddy me lad! A tru’ Irishman could never have too much whiske’.

For the sake of readability (and not to offend any of my many short-fused, punch-happy Irish pals), I’ll write the rest of this post without the Irish accent. But here’s the story I want to share with you in honor of this glorious day. It’s a legend, but I believe it actually happened.

St. Patrick’s Day and the Birth of Infographics 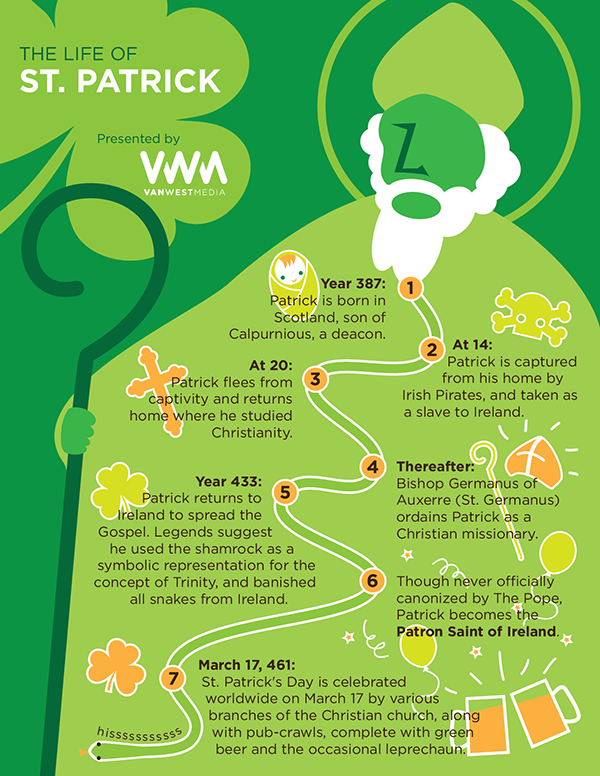 When St. Patrick came to Ireland to preach Christianity, he had trouble explaining to the Irish the concept of Trinity. The notion of God existing as three independent entities, and yet somehow being One evaded the minds of Patrick’s flock, otherwise eager to accept Christianity. The discussion on the nature of Trinity was happening in springtime, under open, cloudless blue sky, on one of Ireland’s famously green meadows. Ever-resourceful, the future patron saint of Ireland picked up a young spring of clover, and its three leaves united at a stem. Pointing at the tiny green object in his hand, Patrick explained that even though each leaf is perfect and independent in its “leaf-ness,” together they form a single entity: a tiny young clover.  The combination of words “little clover”, or “young clover” is pronounced seamróg in Gaelic – we’re more used to spelling this as “shamrock.” The idea of a tiny, gentle cloverleaf as a symbol of the omnipotent God, the Creator and Ruler of the Universe appealed to the Irish to such degree that it became the national symbol of Ireland…and that’s how St. Patrick invented infographics.

Of course, infographics have come a long way since then – and really, they’ve been waiting for the Internet age to arrive in order to blossom to their full capacity. The main advantage of infographics for viewers remain unchanged since the days of St. Patrick: the ability to convey complex concepts in a way that’s easily understood and remembered. However, there’s one important advantage infographics present for businesses that create and publish infographics on their websites: infographics, when they are fun, creative and informative, are linked TO by other websites. This action creates the necessary organic backlinks while promoting your company’s website to higher search engine ranking for the type of information outlined in the infographics.