Sometimes the Best Business Idea is Someone Else’s

Could copying successful business models and launching in emerging markets be the next big thing? So many technology giants and Silicon Valley legends are known for creating something out of nothing and carving ideas into companies. A new generation of startups in emerging markets seems perfectly content to copy, at least in part, the business models of existing companies and launch them in new parts of the world where they might succeed. After all, if it ain’t broke, don’t re-invent it?

A recent article in the New York Times offered a really interesting glimpse in to the idea of copycat business models. The general idea has always been around, but the article points to some interesting ways in which it is getting a bit more large scale. One company the article focused on, Rocket Internet, seems to be taking this to another level and works to assemble team financial people, tech people and funding specifically to create businesses that mimic existing successful business models. 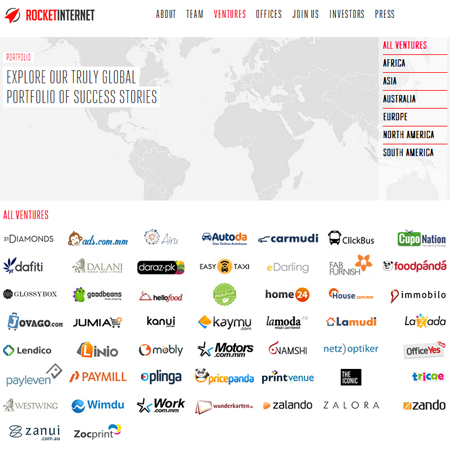 Rocket Internet has created over 100 companies in 50+ countries, including some of the ventures in this screenshot from their website.

From what we gathered the company seemed to be really good at moving really fast with smart people and lots of money in new parts of the world. Think this: get an MBA guy, a Wall Street guy, give them a few million dollars and send them to Denmark to make the next Fresh Direct, or send them to Berlin to create the next Airbnb. If the company can show some profitability and signs of life within 6 months or so, then keep growing. If they don’t, maybe re-evaluate all together or just give up on that one and try again. The companies that do make it keep growing into money making ventures, potential acquisition targets or even future IPO candidates.

First Impressions:
WOW there is a lot of companies. Judging from the logos alone listed on the ventures page there are more than 50 different companies. After looking at a few of the websites it became clear that really comparing them side by side to the companies they were emulating would take a little time – particularly since Van West Media is a New York marketing agency. Most of the websites were native to countries outside the U.S. and in a different language. While many had similar design elements, there weren’t any that immediately appeared to be a straight up duplicate design or total rip-off. For the most part we were comparing home page to home page and a lot of the websites might have different internal pages once accounts are created. In short, there were similarities in some aspects of design, but for the most part it seemed like the focus was more on a business model being deployed in a new part of the world that had proven to already work somewhere else, perhaps with a few local twists or tweaks.

Conclusions:
It’s hard to tell what to think about this concept of mimicking existing successful business models and launching them in new places. On the one hand, the core idea of many e-commerce websites is to provide goods and services to a certain population and has more to do with providing than innovating. If a player like Rocket Internet can get somewhere faster and setup quicker than competitors that might be a kind of skill on its own merits. On the other hand, there are companies that have invested a lot of time and energy to create a business that gets copied and monetized by others without compensation. Maybe they can leverage their existing reputation when they do grow to new locations or simply acquire other companies rather than grow them.

Your Website Needs To Do More Than Look Good

Feet on the ground, Data in the clouds