Is your website up or down when you’re not looking?

I’ll tell you in a moment – but first let’s take a brief detour. I hope you find it intellectually entertaining (the probability is much higher if you are a bit of a geek, like myself). 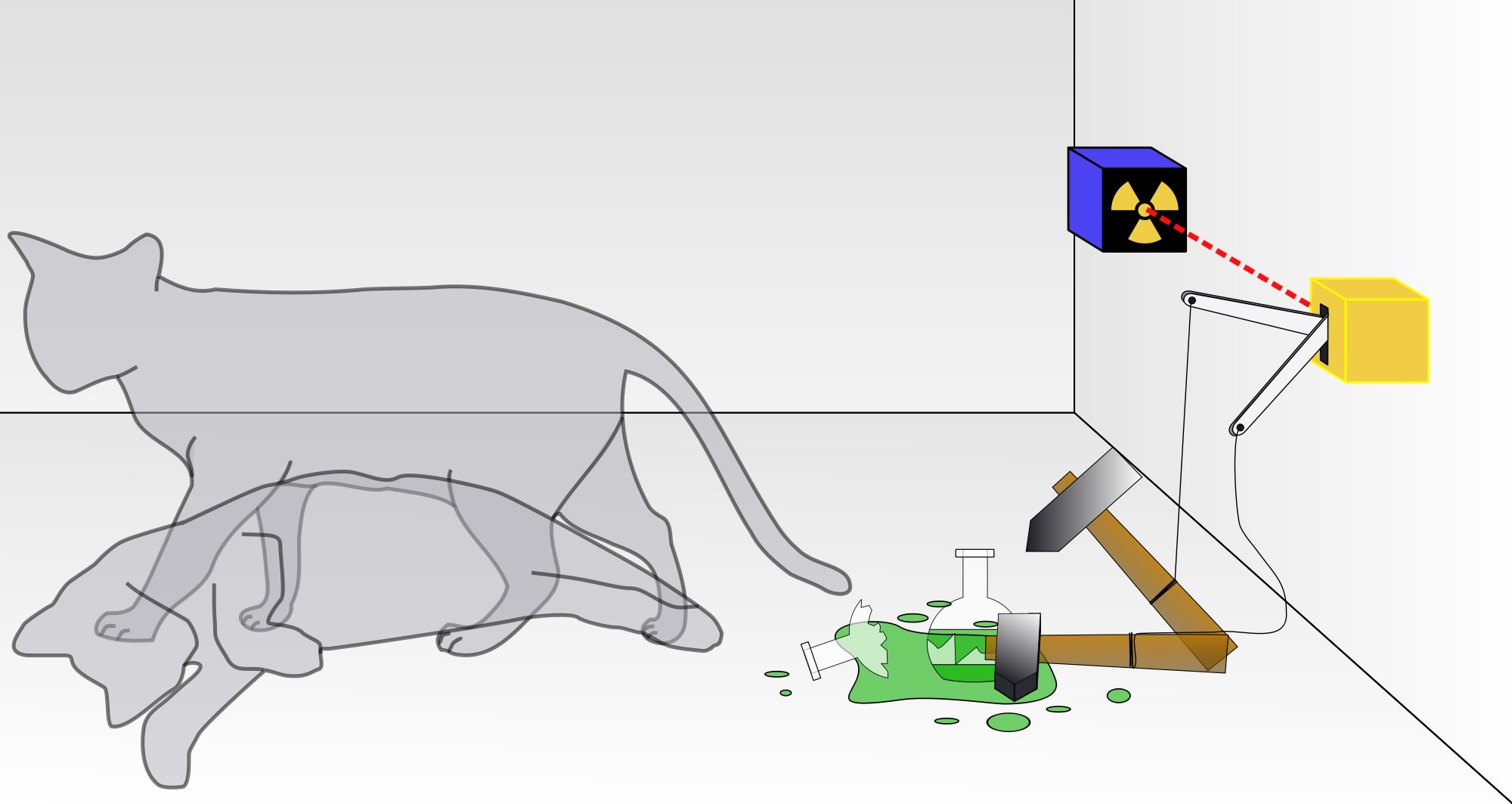 When physicist Erwin Rudolf Josef Alexander Schrödinger came up with his infamous thought experiment, Internet didn’t exit. It was 1935 – the year when first can of beer was sold, world’s first television program had been transmitted, James Braddock beat up Max Baer in Madison Square Garden, and Elvis Presley was born – among many other things that happened during that glorious year, 80 years ago. The Internet was not among those things.

World Wide Web owes its existence largely to particle physicists, and in particular to the guy named Tim Berners-Lee, who took the concept of the hyper-link, which he had been using as a method of toggling between menus on the accelerator computers, and ultimately developed a system that allowed information within CERN (European organization for Nuclear Research) to flow in the optimized fashion.

But back to the cat. Here’s what Erwin Schrödinger wrote in his paper Die gegenwärtige Situation in der Quantenmechanik (The present situation in quantum mechanics):

“One can imagine a ridiculous scenario. A cat is penned up in a steel chamber, along with the following device (which must be secured against direct interference by the cat): in a Geiger counter, there is a tiny bit of radioactive substance, so small, that perhaps in the course of the hour one of the atoms decays, but also, with equal probability, perhaps none; if it happens, the counter tube discharges and through a relay releases a hammer that shatters a small flask of hydrocyanic acid. If one has left this entire system to itself for an hour, one would say that the cat still lives if meanwhile no atom has decayed. The psi-function of the entire system would express this by having in it the living and dead cat (pardon the expression) mixed or smeared out in equal parts.”

What he means is that, according to quantum physics, the cat actually is simultaneously dead and alive. (Not either dead, or alive, but both at the same time… until you look into the box, that is, at which point it’s a 50-50 chance of either states. Are you following me here?)

The experiment would, of course, require a box with special properties, one of which would be perfect sound insulation – and / or a particularly placid cat. Can you imagine a regular, garden variety cat NOT raising hell when locked inside a small box? The cat’s meowing alone (to say nothing of scraping, scuffling, tussling, etc.) would let you know that the cat is still very much alive, should that be the case.

But say we have the box and a cat that satisfy the conditions. In that case, until we look inside the box, according to Copenhagen interpretation of quantum theory, we can only define the state of the cat using the wave function that describes the sum of a dead cat and a live cat. On the other hand, a different way to mathematically describe the same situation with the abused animal, known as Hugh Everett’s “many worlds” interpretation, postulates that at the moment of the first observation Universe splits in two Universes, in one of which the cat is dead, and in the other, alive (I prefer that latter Universe: I’m a cat person, and an optimist). The relational interpretation model states that there’s no fundamental difference between any number of observers and the cat – and therefore as long as someone (including the cat) knows what’s up, we should all be all right. Of course, that model also admits that different observers’ opinions may vary drastically on the matter (like in Akira Kurosawa’s classic movie “Rashomon“). A variation of the same idea, an objective collapse theory, states that as a result of some objective physical event, all possible alternatives collapse into one state long before observation is made.

(By the way– the subject of this article is actually your website’s uptime, remember? So what do cats, physicists, and Japanese film directors have to do with that? Don’t worry, it will all become very clear in a second.)

There is a famous statement on the same subject, was actually made much earlier by William Fossett in his 1754 philosophical work “Natural States”: “To say something is meaningful is to say that that is how we arrange it so; how we comprehend it to be, and what is comprehended by you or I may not be by a cat, for example. If a tree falls in a park and there is no-one to hand, it is silent and invisible and nameless. And if we were to vanish, there would be no tree at all; any meaning would vanish along with us. Other than what the cats make of it all, of course.”

Funny how scientists and philosophers tend to bring up cats every time they open their mouths. (To say nothing of server admins, who live and breathe cats, especially Schrödinger’s ones.) Albert Einstein, though, was emphatically different, in that he actually used mice when speaking on the related subject. “Does the moon exist just because a mouse looks at it?” – he often asked.

By the way, here at Van West Media we love cats and mice (and any other pets, for that matter). We love them so much that we actually built several veterinary websites: Ruby and Jack’s, Animal Health Center, and New Rochelle Animal Hospital, to name a few. So if your cat (or dog, or llama) is going through the same kind of messed-up day as Erwin Schrödinger’s favorite animal, maybe you should visit one of our client’s clinics. Or, if you are a veterinarian, and want to have a website that improves your business, Van West Media would be glad to build and market your new website. Give us a shout!

But back to the main question: is your website up or down, when you’re not looking?

The answer is, according to the quantum theory: the status of your website can only be defined using the psi-function that describes the sum of a website that is online and offline. Which is another way of saying, “who the (bleep!) knows?” When you’re not looking, your website is just like Schrödinger’s cat – it may be alive, dead, or perhaps taking a stroll on a roof.

I’ll tell you something even scarier: even if your looking at your website in the browser right now (which you’re not, because you’re reading this article… aren’t you? No way for me to know because I’m not observing you.) – so, even if you were staring at your website in the browser right at this moment, that would be the page already loaded to your computer, and in the meantime your website may have already crashed! Go and check, quickly (but remember to bookmark this article so you can finish this read).

Or quite on the contrary, you may think your website is down, because you cannot access it, but it could be totally online for everyone else, and the problem could be with your own computer or network. Here’s a useful tool that could give you a relatively objective view: Down for Everyone or Just Me.

So, how can you be sure that the website you probably paid a lot of money for is actually online?

The best way to do that is to actually become the constant observer – to monitor the website at all times. Basically, what you should do is sit in front of your computer day and night, and keep refreshing the homepage of your website, making sure that it’s still online (on the second thought, maybe not: if your hosting company is not very good, that very behavior may cause your website to crash).

I’m joking of course. You can make the monitoring process automatic.

For example, if we wanted to know the state of health of Schrödinger’s cat without looking into the box, we could hook the cat up to a cardio-monitor, which would trip an alarm should anything go out of he ordinary with the cat, so that we could freak out, drop everything, rush to the rescue, and go George Clooney on the cat, performing CPR or emergency defibrillation, or whatnot.

Similarly, we can send an access request (a “ping”) at regular intervals to a server hosting your website, and if  server fails to respond, it would mean that your website is down. You can create an account with a nice commercial service that can send you an email or a text message as soon as your website stop responding to pings: Pingdom. This way, as soon as your website goes offline, your cellphone gives a buzz, and you can pick it up and call your 3 bucks-a-month all-websites-on-one-shared-server hosting company, and ask them all sorts of questions about what their server administrators are up to, when no one is observing them (the answer is, they are busy playing Dungeons and Dragons).

Or you can delegate the tasks of monitoring your website to experts. For example, to us: Van West Media. We are using a number of very robust industrial quality monitoring solutions that inform us immediately on those very rare occasions when something out of the ordinary is taking place with the websites that we host and support for our clients. This way we can immediately respond and address the issue – and we do. Currently Van West Media’s average time of response to a server emergency is measured in milliseconds. And incidentally, we host our clients websites on dedicated virtual hosting servers with capabilities bordering on extraterrestrial technology.

So – is your website up or down when you’re not looking? The answer is, if it’s hosted with Van West Media, it’s probably up – or at least being rapidly restored by a group of highly skilled technicians, capable of solving anything that a rogue process or a mean-spirited hacker can throw at your website. Let us know if you need improvements in your website’s uptime – we can certainly help.

Oh, and last but not least: save Schrödinger’s cat!

Why .com Top-Level Domain is Still the Boss