Language of the Internet 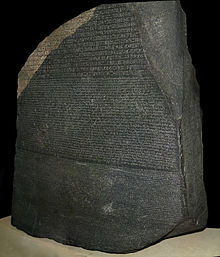 Do you think the creator of the Rosetta Stone considered the language of the Internet?  Look closer.  Can you see your latest tweet?  If you’re confused, not to fret.  Let’s start at the very beginning.

A funny thing happened to me this afternoon.  A friend of mine showed me his favorite youtube video.  He said it was one of the funniest videos he’d watched in a long time and kept cracking up while we watched a screen filled with two cartoon characters speaking strangely with subtitles like “u probly havnt seen one of these bfr“.  He kept cracking up and while I found it amusing…I didn’t get it.  About halfway through the video he noticed I wasn’t laughing and he stopped the video.

The entire cartoon was written in a tweet.  I am personally not a big tweeter so when the characters started speaking in a tweet I was left in the dark.  My friend continued to watch the video, cracking up with laughter.

This video was not my cup of tea, but it got me thinking about our tools of communication.  Our language.  Our technology.  Our connection.  Language provides us with a shared collection of symbols and sounds to communicate an idea.  What happens when those tools have evolved in a medium you’re unfamiliar with?  You’re left in the dark.

Language has evolved, so has the Internet.

Time to turn on the light.