Kiip and the Future of Mobile Advertising 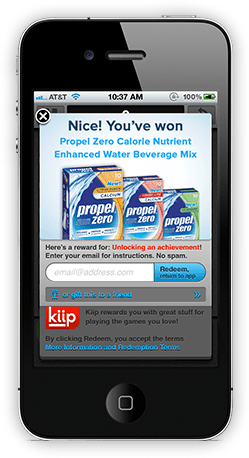 I find that advertisers seem to speak somewhat highly of mobile advertising. It’s true that there are some great mobile ads out there, but for every great ad are 10 that are intrusive and unwanted. I’m not convinced that we’re anywhere close to a place where we can confidently state that mobile ads are effective. You can argue that they’re reaching a more specific demographic, but if the ad isn’t done well, it doesn’t matter who’s eyes are on it.

When I learned about Kiip, I felt like a big forward step was taken in mobile advertising. The start-up believes advertising should be based on reward and choice. Instead of simply serving an ad to a gamer after they achieve a high score or enter a new level, apps using Kiip present discounts or a free item courtesy of a brand. With this model, mobile application users will have better incentive to stop what they’re doing and pay attention to the ad.

By using this rewards system, Kiip recognizes that instant gratification may be the key to satisfying customers with branded content. It also allows users to specify whether or not they want to redeem the reward. The start-up noted that after some time, people who used apps that served Kiip ads sought out other Kiip apps. With the increased popularity, Kiip began developing its own app that customers can use to track past rewards they’ve received.

In the future, Kiip aims to create rewards for everyday life activities. It has already begun working with Secret brand deodorant to give free songs to MapMyRun users who achieved certain goals.

When looking from Kiip’s point of view, many of the mobile ads we see now are simply the beginning of the endless possibilities for advertisers. Without seeming intrusive, brands also win with this model as consumers aren’t frustrated by ads that prevent them from continuing the game. The ads are not only a part of the game, but also one of the best parts.