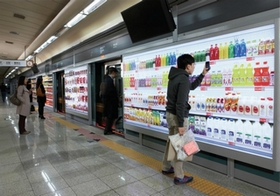 Earlier this year, I wrote a post about QR Codes and how they’re an overhyped marketing tool that consumers aren’t catching on to. A few months later, I learned about Tesco’s virtual grocery store and reconsidered a bit. Sometimes things get overhyped because they’re truly awesome, we just don’t have a very good way to use them yet.

The virtual grocery store was a strategy Tesco used to increase sales without building new stores. The plan was to bring the grocery store to the people. By doing that, they placed a type of wallpaper inside the subway that showed pictures of grocery items. Under each item was a QR code that people could scan to place the item in his or her shopping cart. Once complete, a Tesco company, called Homeplus, sent deliveries to the shopper’s doors when they arrived home from work.

Now, if you’re from New York, your first thought was “that’s nice, there’s no phone service in the subway,” which is why it was initially launched in South Korean stations. In fact, South Korea is one of the most progressive countries in terms of smartphone usage, so it was easy to see why it would catch on there before anywhere else. Also to note, some stores were placed at bus stops where service is available everywhere.

Tesco achieved immediate success and is now one of the top online grocers. Since then, a United States company, Peapod has launched similar “shops” in Chicago and Philadelphia, proving that people around the world hate grocery shopping as much as South Koreans.

Virtual grocery shopping is an idea that will only spread further from here and I invite you to  be the first to bring this to New York. To learn more about Tesco’s store, watch the video below.

The Sullivan's Step Forward Into the New Catskills

Advice From an Analyst